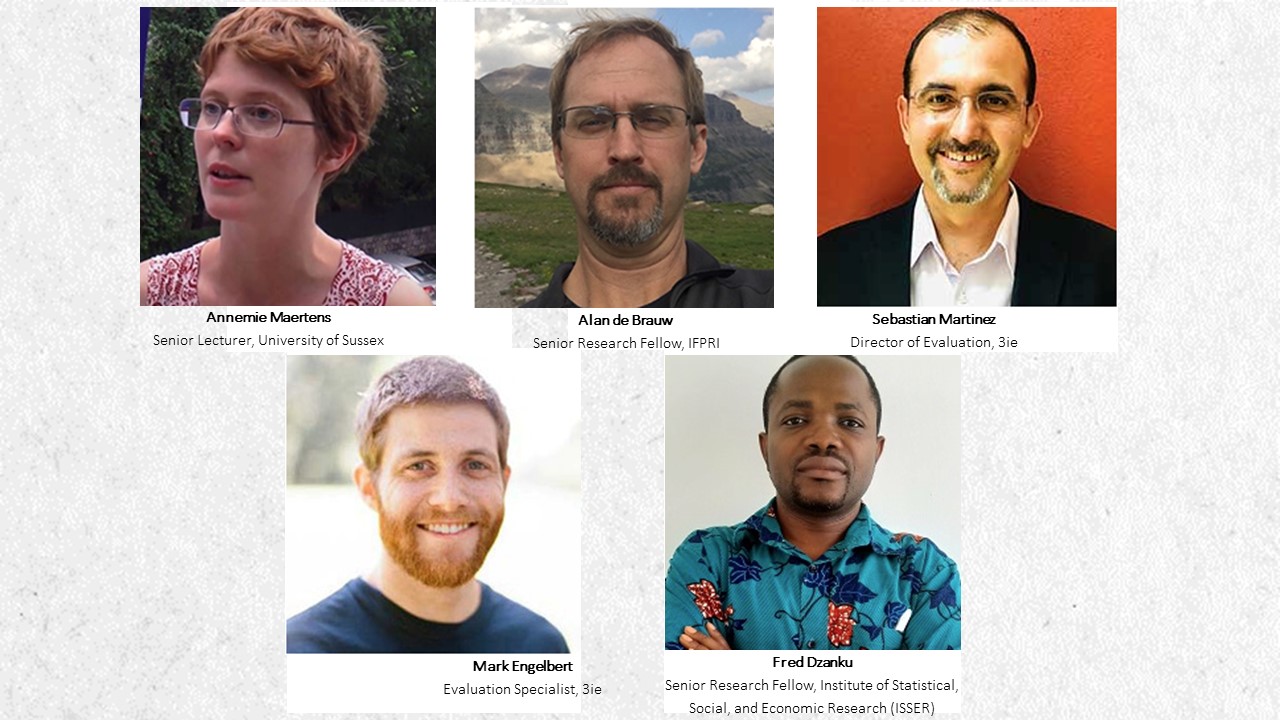 To encourage smallholder farmers to adopt new agricultural technologies, sometimes little nudges – like an automated 6 am phone call – can be effective where training sessions alone were not. And successfully conducting the research to learn such findings can require a great deal of flexibility among researchers, in order to handle the unexpected turns that arise with everything from program changes to the weather.

These insights came from panelists on Thursday’s 3ie Evidence Dialogue webinar, which brought together the lead researchers from three 3ie-supported impact evaluations on agricultural innovations. They discussed the findings from their research and all of the mid-evaluation course corrections they had to make to successfully complete the evaluations.

The automated 6 am phone calls were part of a program in Cambodia. The research team had originally hoped to use text messages, but they realized those would be ineffective because a majority of the phones used by Cambodian farmers do not display Khmer script, said Alan de Brauw, Senior Research Fellow in the Markets, Trade and Institutions Division of the International Food Policy Research Institute.

The messages showed evidence of being effective in three ways, de Brauw said: (1) farmers tended to listen to the whole messages, (2) farmers reported being more productive as a result, and (3) farmers reported increased knowledge of the new farming techniques.

Similar findings emerged from an evaluation in Mali, said Fred Dzanku, Senior Research Fellow at the Institute of Statistical Social and Economic Research of the University of Ghana. In that evaluation, training sessions alone did not yield positive effects – but sending farmers reminders on their phone during the growing season did, serving as an important nudge.

In an evaluation in Malawi, one main lesson was that farmers learned about new innovations in two stages: first they assessed whether it would be profitable, and only after that step would they consider learning the details, said Annemie Maertens, a Senior Lecturer at the University of Sussex. But there were a lot of roadblocks on the way to completing the research, including issues with the implementing organization and the fact that the weather did not cooperate.

“We had particularly bad luck with the weather … there were three out of five years where the weather was particularly bad,” Maertens said. “We could not get to the fields at some points because of the floods … we were trying to collect soil data, but the soil was too waterlogged to even collect.”

Both Maertens and Dzanku discussed how their research teams had to redesign their studies as a result of changes to the program made by implementing organizations mid-intervention.

For the Mali evaluation, before the implementing organization had received its funding, the relationship seemed to be going great, Dzanku said.

“After they got the funding, we went to Mali again, and then the story changed,” Dzanku said. The research design they had previously agreed on would no longer be possible because of the implementing organization’s changed approach, so Dzanku’s team had to come up with a new plan.

For de Brauw’s research team, the challenges started at the beginning. For that study, the program was being implemented by the Cambodian government – and its officials were initially skeptical of the foreign research team, he said.

“We ended up getting along great, but it really took a lot of face time to get that to work,” de Brauw said.

One of the exchanges that helped him win over his government counterparts had nothing to do with research, he said, it was when they invited him to play soccer with them. Despite his jetlag, he joined the game.

To watch the full discussion, which has many more details about all three evaluations, their findings, and the problems they overcame, the full video of the discussion is available here