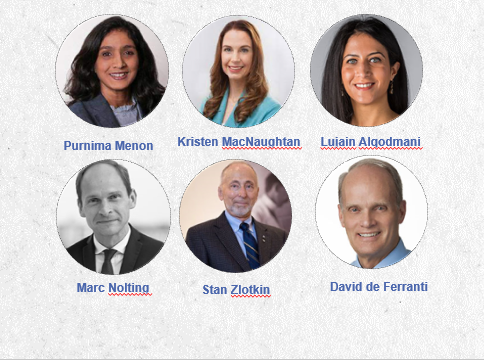 Sustainable Development Goal 2 – eliminating hunger – is breathtaking in both its simplicity and its scope. We all know how to avoid hunger in our own lives, but on a global scale, the task brings together a dizzying array of potential policies: agricultural support, cash transfers, school lunches, or taxes on sugary sodas, to name just a handful.

At 3ie, developing rigorous evidence on these issues has been a focus of our recent work: a living evidence gap map with more than 2,000 studies on the food system, a rapid evidence assessment about women’s empowerment interventions in the food system, and a systematic review about whether taxes or subsidies can affect people’s diets.  On Thursday, our Evidence Dialogue webinar brought together a group of experts to reflect about how to turn this evidence base into effective policies and full stomachs.

Early in the panel, 3ie Senior Evaluation Specialist Charlotte Lane presented some of the findings from the new evidence syntheses she and her colleagues have conducted.

“There’s been a recent international push to support women’s empowerment across all sectors,” Lane said. “Women within the food system have a particularly interesting role, because they’re often assigned to positions as mothers and cooks, which makes them targets of a lot of interventions on consumer behavior, and these actually can perpetuate cultural stereotypes.”

However, some interventions do not fall into this pattern of relegating women to this secondary role, particularly those focusing on women in the agricultural sector. These interventions yielded results.

“These interventions that were trying to empower women were not approaching them as consumers but were thinking about women as food producers – and they tended to work,” Lane said. “They improved food security, affordability, and availability.”

On taxes and subsidies, however, the verdict is still out.

“It can be really hard to track the scope of research, especially when we’re talking about the breadth of the food system, which spans production through to consumption and crosses several sectors and disciplines,” MacNaughtan said. “It’s even harder to remember when results will be in and when papers will be published.”

GIZ, which funded the evidence gap map, is already using it to identify priorities and shape programs, said Marc Nolting, head of the global agenda for food and nutrition security at GIZ.

“So far we have been using the evidence gap map in the development of research priorities that we commission within GIZ, but also to fine-tune project activities based on the latest evidence,” Nolting said. “We do hope that the living character of the gap map will be continued together with other partners to ensure that we have an up-to-date evidence base that we can refer to and increasingly base our policies and programs on the latest robust evidence.”

Beyond the evidence syntheses, personal linkages between the research world and the policy world are also essential to maximize the impact of research and evidence, said Purnima Menon, senior research fellow at IFPRI.

“Policymakers are [researchers’] allies,” Menon said. “They are incredibly smart people, most of them want to do the right things, we’re just not always able to meet them with what they need precisely when they need it.”

She also highlighted the need for regionally-specific and context-appropriate evidence.

“Smart policymakers want evidence from their context,” Menon said. “If there isn’t enough evidence in India or Bangladesh or a South Asian country or even for the region, it’s going to be very difficult for us to tell the policy community in that context that there’s enough evidence for them to act.”

Part of identifying the right evidence for a given local environment is understanding the level of bureaucratic capacity in a context, said Stan Zlotkin, chief of the Centre for Global Child Health.

“There is certainly an important distinction between design of health policy and its implementation,” Zlotkin said. “State capacity for implementation is a crucial factor that is quite different from developing evidence … if government bureaucratic capacity is low, governments are much more challenged to effectively implement health programs despite political pressure and even political commitment to expand health service delivery.”

Stepping back, all the evidence points in a positive direction: the change the planet needs is within reach, said Lujain Alqodmani, director of global action and project portfolio for the EAT Forum.

“The transition to healthy, sustainable, equitable and resilient food systems is possible and urgently needed for the health of the people and planet,” Alqodmani said “I do believe we have enough evidence in our hands to roll up our sleeves and implement actions on the ground.”

For many more insights on the link between food systems research and policy, watch the full discussion here.