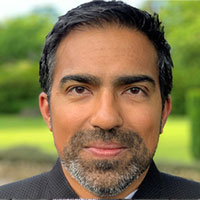 Kumar Iyer is the Director General, Delivery at the Foreign, Commonwealth & Development Office. Previously he was a Director General in the Prime Minister’s COVID-19 Taskforce, and before that the Chief Economist and a Board Member at the Foreign and Commonwealth Office (FCO). He has was previously a visiting academic at Hertford College, Oxford University. He conducted his post-graduate studies at Corpus Christi College, Cambridge University where he also taught the undergraduates. He was a Kennedy Scholar at Harvard University where he was also a teaching Fellow in international finance and macroeconomics.

All sessions by Kumar Iyer

Evidence-informed development – starting with the man in the mirror